I was born near Montréal to a Canadian father and a Belgian mother. My family moved to Boston in the USA when I was 12, and this is where I learned English. We moved back to Canada when I was 16 and settled in Toronto where I have lived ever since. I am a husband and the father of two young men that were raised as naturists.

I graduated from Wilfrid Laurier University with a Bachelor of Arts degree in political science and psychology. It was around that time that I discovered naturism and visited my first naturist club. My early career was in the advertising industry and I used my marketing communication skills to help the Federation of Canadian Naturists (FCN) as a volunteer. I eventually become a board member and after several years as a director I became president.

During my involvement with the FCN it became clear to me that many naturist clubs were struggling to grow not because of a lack of opportunity but because they had failed to keep up with the times and to market themselves effectively. As a result, I began to consider starting or purchasing my own club. It was obvious that I could not manage a club while employed somewhere else. But I did not want to run a naturist club where decisions had to be made because of financial pressures. I wanted naturism to be the primary focus. So I decided that I needed to start another business which would support my family and me while providing the flexibility to also run a naturist club. With a friend I founded AEC Daily in 2000. It is a business which provides continuing education for architects, engineers, and other design professionals in the construction industry.

That first business gave me the freedom in 2006 to purchase what is now known as Bare Oaks Family Naturist Park. At the time, the infrastructure was in dire need of improvements. Most of the 100 or so campsites were empty and membership was just over 100 people. Today we have more than 830 members and we get over 4,000 non-member visits per year. All of our campsites are full and there is a long waiting list to get one. In the fifteen years we have owned the park, it has never served as a source of income. Instead all of the revenue has been reinvested into growth and development.

In 2008 I stared the Naturist Living Show podcast. At the time it was just an attempt to play with a fun new technology. But its listenership has now grown to the point where it is in the top ten percent of all podcasts.

From 2014 to 2017, I taught a course at the University of Toronto called Public Nudity – History, Law and Science. The course was quite popular and had to be limitedto 140 students so there was usually a waiting list. I really enjoyed teaching the students and several of them ended up as summer staff at Bare Oaks.

I have also volunteered for a number of other community organizations such as Camping in Ontario, the association of private campgrounds for Ontario, and as president of the East Gwillimbury Chamber of Commerce. But I have resigned from these other responsibilities as I recognize that being president of the International Naturist Federation is an enormous challenge which will require my complete focus. 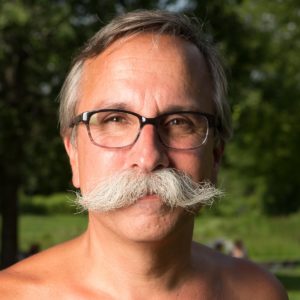 Nudist Club “Garden of Eden or What Really Happened in Paradise A short story by Ronald W. Johnthaler

Nudist Club “Garden of Eden or What Really Happened in Paradise A short story by Ronald W. Johnthaler

Edwin Kilby, the new Vice President (Secretary) of the INF-FNI

Edwin Kilby, the new Vice President (Secretary) of the INF-FNI