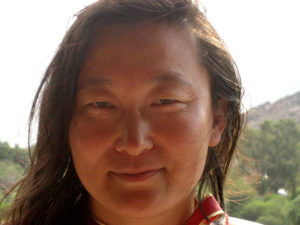 Born in Seoul, Sook-Hwa has lived in Spain for almost 35 years. She has a degree in Hispanic Philology from the Korea University and Complutense University in Madrid, received a doctorate in Modern and Contemporary Literature from the Complutense with Summa cum Laude, completed a Teacher Training Course for Teaching Spanish as a Foreign Language at the Menéndez Pelayo University and has had numerous publications in literary magazines.
She is fluent in Spanish and English and enjoys playing piano. Sook-Hwa has worked as an interpreter at the International Film Week in Valladolid „Seminci“, as a teacher, lecturer, translator, tour guide, actor and more. She has held the responsibility of International Relations Officer of the FEN (Spanish Naturist Federation) and ADN (Association for the Development of Naturism in Madrid) since 2003.
She is a member of the Board of Trustees of the International Human Rights Foundation, the first Spanish NGO on Twitter with nearly 700,000 followers (@Declaracion).
She has attended all the INF-FNI World Congresses and all the EuNat Meetings (previously Interfederal) since 2003, as well as some Swimming Galas and Alpe-Adriatic Meetings.
She participated in the organisation of the Interfederal Meeting in Vera, World Congress in Portús, Swimming Gala in Gijón, Spain in 2006, and has participated in the organisation of the Southern Europe Meeting since its inception at Arnaoutchot (France) 2010