OMNIVORES AND VEGETARIANS IN THE TIME OF THE CORONAVIRUS

OMNIVORES AND VEGETARIANS IN THE TIME OF THE CORONAVIRUS 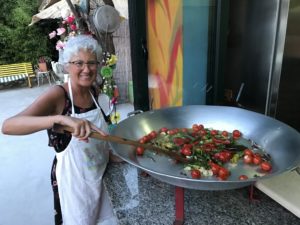 In the italian naturist magazine INFO Naturista, we had already dealt with vegetarians because we had raised the problem of the impact that animal farms, especially those of an intensive type (cattle, sheep, pigs, chickens, etc.) had on the environment. Those were the times, four or five years ago, when the World Health Organization (WHO) had accused processed red meat. At that point, the debate between omnivores and vegetarians had become more heated. Naturism, it must be said, has always maintained a position of equidistance, because the naturist movement has deemed equally valid, both the position of vegetarians, because waste is not ethical (cattle breeding consumes a lot of water and animal manure pollutes extremely pollute the environment), and those of omnivores because the reasoning, from an anthropological point of view, does not make a difference: we have been conceived to eat everything for a matter of survival.

We made this premise because I believe that we naturists must be pragmatic and flexible about people’s ethical choices. Our movement must have aggregating capabilities, so if we took a position for this or that thesis we would not be tolerant. Indeed, stating that “you cannot be a naturist if you are not a vegetarian” appears to be an extremely radical position (even if it now seems certain that a vegetarian diet is healthier than that which includes meat), as it is difficult to understand the position of those who says that naturism would lead to transcendence, a statement that, in addition to being of religious inspiration, takes on a decidedly metaphysical value.
Because, if we followed this path, then we would have to start by saying that, who is a hunter, who is a smoker, who eats meat, etc., in the same way who is an atheist cannot be accepted into the naturist movement. However, it must be clear, as it was written in the number 29 of this magazine, that we must speak of vegetarianism because this is part of naturism, as evidenced by the Statute of our movement where it states that “naturism promotes nudism intended as a way of live in harmony with nature, which finds its essential expression in collective nudity, also encouraging the practice of life in the open air, exercise, natural and vegetarian nutrition, natural medicine (to the extent possible), the promotion of peace and human rights, the protection of the environment, nature, non-human animals, the fight against pollution, consumerism, the abuse of alcohol and the use of tobacco and drugs … “.

From this we deduce, and from here the ethical freedom which the naturist movement is currently inspired by, that it is not easy to stick to a lifestyle pushed to the limit, also because finding totally non-animal clothing is not easy. And anyway this problem implies some questions: aren’t synthetic clothes harmful to the skin? Does cutting sheep fleece cause them suffering? Etc. This does not mean that humanity must seriously address the problem of a vegetarian diet as it is mathematically proven that to produce a kilo of meat, up to ten times more soil is needed than to produce a kilo of cereals.
As far back as 1988, the magazine “Naturismo” dealt with the issue going back to the origin of this practice. “Vegetarianism”, it was said, “has taken on an almost religious meaning and symbolism, because adepts considered the intake of meat, before a form of food harmful to the organism, a reason for psychic regression in the sphere of animality , in the primordial world where the strongest beast suppresses and devours the weakest beast in accordance with the strictest biological law. Man, who is a participant in this law, but also transcends it due to its undoubted psychic spiritual value, refusing to feed on the flesh of animals, would not only place himself above a costume that repels sensitive souls, but it would also put a brake on the empire of biology, thus contributing to the elevation of man and his nature ”.
All this is beautiful and true, and who knows how many people would become vegetarian if they had to kill an animal with their own hands. Most certainly. And yet, despite the image appearing raw, if we make a local mind do we realize that the fetus does not feed on the blood of the mother? And that the growth and development of the fetus certainly does not occur through the assimilation of vegetable substances, but through the appropriation of substances belonging to the mother’s body, such as breast milk. By analogy, certain vegetarians, such as those who, despite having banned meat from their diet, drink milk, eat dairy products and eggs, do they not behave a bit like the newborn who feeds only on the mother’s milk ?. We say this only by way of example, knowing full well that the vegetarian world, as mentioned above, is divided into many subsets.
Having said that, it should be remembered that no one escapes the law of life, not even whole vegetarians. Certainly, from a purely hygienic and social ethics point of view, meat consumption must be limited (WHO has unequivocally told us). In addition, every human being with sensitivity has the duty to collaborate with institutions and all those protectionist initiatives so that animals are not mistreated, unnecessarily decimated or killed for sadistic fun (hunting!). Under the natural law, animals share the same fate with us and with the vegetable kingdom.
From what has been said, it is clear that those who are not vegetarians do not have a perfect coincidence with the ideal figure of the true naturist. A vegetarian is certainly a naturist, and certainly among the best, but a naturist, without prejudice to sensitivity and respect for animals, is not required to be a vegetarian. What is certain is that a non-nudist vegetarian is certainly not a naturist, because the only practice of vegetarianism is not enough to qualify him as a naturist. And the reasoning is simple: a nudist becomes a naturist when a person accepts his natural condition, that is, he accepts that nature which, in the condition in which we live in this life, admits that certain beings feed on other beings belonging to a other species. Naturist is therefore a person who accepts nudity just as he accepts – of course, within reasonable limits – the universal law of nature.

And here it is important to underline the concept of “reasonable limits”, in the sense that the use of the sacrifice of other living beings for the purpose of one’s survival must be contained within the limits of real needs and with the sobriety that must distinguish every good naturist. So the naturist is not a person who only undresses, but a person who also dresses when necessary. For the same reason, and in perfect analogy, the naturist, who is ready to give up his nakedness to dress a wool sweater (taken from the sheep!) In the cold winter, is also ready to feed on all that nature offers him , always when this is strictly necessary (for example, the Eskimos, being unable to feed on vegetable foods, can never be vegetarian).
In conclusion, what we want to say, recognizing the vegetarian diet’s merits, is that the sharp contrast between omnivores and vegetarians has no reason to exist: just respect the rules of ethics and moderation by the so-called “carnivores” “And at the same time reminding vegetarians that their diet must be integrated with the B12 vitamins, present only in meat (so much so that they are forced to take so-called supplements). The important thing is to live up to the law of the least possible damage, to oneself, to others and to nature in its universality.

Gregers Moller steps down and is succeeded by two new officers

Gregers Moller steps down and is succeeded by two new officers

Thank you, Jean Peters A Vice-President who has left his mark

Thank you, Jean Peters A Vice-President who has left his mark